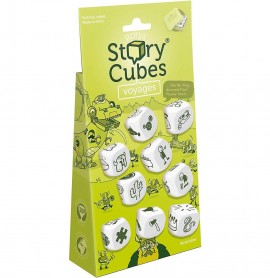 Roll the cubes, begin with “Far, far away…”, start with the first symbol to grab your attention, and tell a story that links together all nine face-up images. There is no wrong answer, as the goal is to let the images spark your imagination.

Rory’s Story Cubes: Voyages – a pocket-sized set of nine cubes depicting 54 icons to inspire epic adventure – is the second expansion set for Rory’s Story Cubes, while also being a standalone item. Made to the same high quality as the original set, the cubes are inked in dark green to allow for easy sorting if you choose to use more than one set during play.

As with Rory’s Story Cubes, you can play Voyages as a game for one or more players, as a party game for three or more, or as an improv game in which each player contributes part of the story, picking up where the last one left off. Win award points for speedy delivery, inventiveness, imagination, drama and humor.

Please allow for 5 days for delivery after payment is received 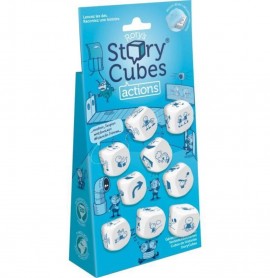 Imagine telling stories that are dynamic, interactive, fun, and randomly generated. Imagine never being stuck for an idea ever again.
Rory’s Story Cubes: Actions lets you tell tales of dynamic deeds and adds new actions to your active storytelling arsenal.

Please allow for 5 days for delivery after payment is received