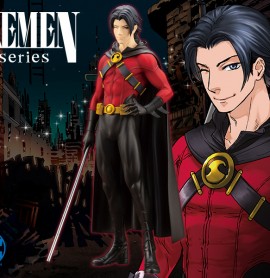 A KOTOBUKIYA Japanese import!  Kotobukiya’s IKEMEN series continues to amaze fans all around the world!  Similar to the popular Bishoujo series, this fantastic expansion is a lineup of popular characters re-designed by the famous Japanese illustrator Ricken in the Japanese Ikemen (“handsome men”) style. Following up after the first two men who donned the costume of Robin (Dick Grayson as Nightwing and Jason Todd as Red Hood) is the young hero known for being an incredible detective and a smart leader: RED ROBIN!  After Jason Todd left Batman’s side the brilliant Tim Drake actually discovered the Dark Knight’s secret identity and proved his desire to fight crime alongside the superhero.  Tim always did things a little differently than the Robins who came before him, creating the identity of Red Robin and going on to adventure with Young Justice and the Teen Titans.  Now he’s following in the footsteps of his predecessors yet again with a fantastic new representation in the Ikemen series and even a special first edition with bonus part! 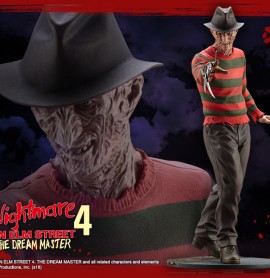 A KOTOBUKIYA Japanese import! The horror hits continue from Kotobukiya with the latest addition to the ARTFX statue series that’s straight out of your nightmares… coming to life from A Nightmare on Elm Street 4: The Dream Master is FREDDY KRUEGER! Once a mortal serial killer, Freddy became a seemingly immortal entity of madness and murder who tortures young people in their dreams. In 1988’s fourth installment of the franchise Krueger returned from the beyond once more to torment his victims, ultimately facing off against a young woman who had dream powers of her own. Now you can bring the gloved slasher home to your collection! The terror of Springwood, Ohio, Freddy Krueger has found a new victim and reaches forward to enter your dreams. One of the things that’s always made the slasher extra creepy is his outfit, and that’s in full effect here as he wears industrial-looking pants and boots with his iconic frayed red and green striped sweater. Freddy is captured sauntering toward you, turning on one foot as he steps forward and reaches out with his trademark bladed glove. Meanwhile, the slasher’s gruesome, burned head with its sinisterly smiling face is replicated with all of the attention to detail you’d expect from Kotobukiya. Freddy even comes with his favorite fedora, which is removable, and interchangeable glove hands in different poses give you lots of display options! Sculpted by Naoya Muto, A Nightmare on Elm Street 4: The Dream Master Freddy Krueger stands nearly 11 inches tall (1/6 scale) on a detailed terrain display base. He may bring terror beyond your wildest dreams but he’ll also be a magnificent centerpiece in your horror collection!