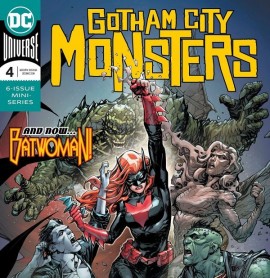 Melmoth has come to Gotham City, and he’s ready to use the dark forces of the city to carry out his final attack on the Multiverse at large. While he figured his old servant Frankenstein would be rallying his monstrous friends to give him trouble, Melmoth didn’t bargain on the Bat family taking notice. (Don’t they have enough to do with Bane and all that other stuff?) But take notice Batwoman has, and she’s looking to add some extra kick to the efforts of Killer Croc, Lady Clayface, and the rest. It may not be enough, however, when Melmoth puts one of their own- Andrew Bennett, a.k.a. I, Vampire-under his evil spell. 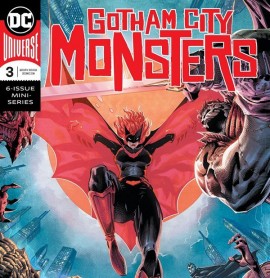 The monsters have united in the aftermath of Melmoth’s attack, but one of their own has gone missing! Andrew Bennett, a.k.a. I, Vampire, has gone straight to the source of the evil that threatens the city, but the fanged one finds attacking Melmoth’s acolytes is biting off a little more than he can chew. Frankenstein leads Killer Croc, Lady Clayface, Orca, and the mysterious Red Phantom on a chase through the Gotham underground to try to rescue Bennett and shut down whatever Melmoth has planned next. But will their showdown at the Gotham City Zoo attract the attention of any of Gotham’s other protectors? Batwoman, perhaps? 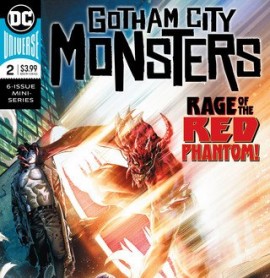 Melmoth’s attack on Gotham City has immediate consequences for the denizens of Monster Town, and the losses suffered by Frankenstein and the other monsters have suddenly made this very, very personal. It’s up to Frankie to convince his cohorts that they need to band together against this common threat, lest all of Gotham—nay, the Multiverse!—fall to the might of his old master. But before they can do that, they must first answer the question: Who is the Red Phantom? 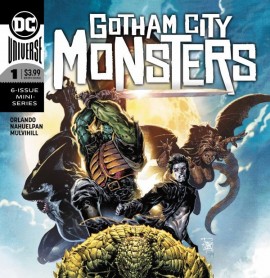 Leviathan has dismantled S.H.A.D.E. – and that means Frankenstein is once again a free agent! Now he can set his sights on his former mentor, Melmoth, the one evil that got away. With bad things happening all across the Multiverse, this may be Frankenstein’s last shot at setting things right. Of course, Melmoth has his own agenda, and it’s going to take more than a lone monster to take him down. So Frankenstein heads to Gotham City in search of allies and recruits Killer Croc, Lady Clayface, Orca and vampire Andrew Bennett. But will even these dread creatures be enough to save humanity before the entire cosmos collapses in on itself? 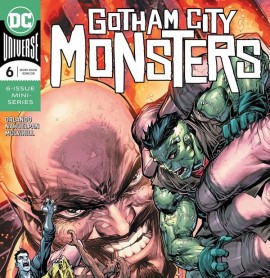 It all ends here! Melmoth is looking to destroy the world before anyone else gets their evil hands on it, but he better watch out—the Monsters aren’t ready to see their planet die. It may not treat them the best, but it’s home! Frankenstein in particular has a big stake in stopping Melmoth. If he can defeat this diabolical mastermind once and for all, it means he will be free of the curse of their shared blood. 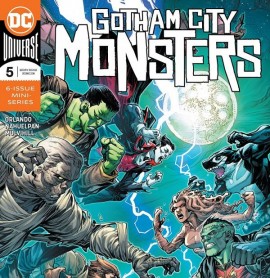 Melmoth has summoned the Monster League of Evil from the depths of the Multiverse to serve as his minions and destroy the Gotham City Monsters. Dracula, the Wolfman, the Mummy and…Frankenstein?! It’s Frank versus Frank in this showdown to save the Multiverse as we know it!