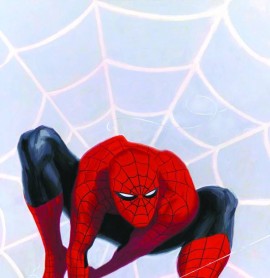 MARVEL COMICS
(W) Paul Jenkins (A/CA) Paolo Rivera
Continuing the prestigious series showcasing the origins of the greatest heroes in the Marvel Universe! Find out how Spider-Man’s super hero career began in a fully-painted recounting of the origin of the original hard-luck hero.
Add to Cart 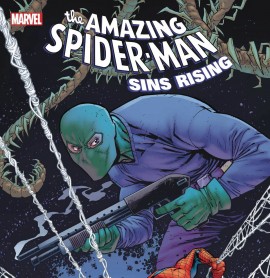 MARVEL COMICS
(W) Nick Spencer (A) Kim Jacinto (CA) Ryan Ottley
• Who is the Sin-Eater, and why is it so terrifying that he’s back?
•  Nick Spencer pulls back the curtain on one of the most dangerous Spidey villains in history.
•  We will not only reveal more of Sin-Eater’s secret history but put him on a collision course with Spider-Man that will have you quaking in your seat.
Add to Cart 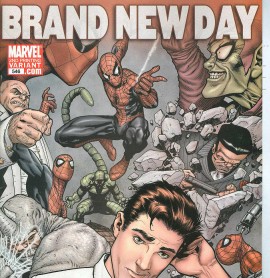 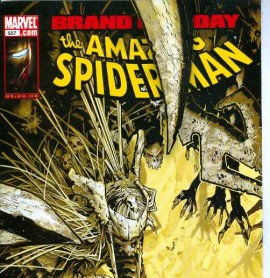 MARVEL COMICS
(W) Zeb Wells (A) Ben Steeves
Written by ZEB WELLS
Pencils & Cover by CHRIS BACHALO
“Sometimes It Snows In April” (Come on it’s a Prince reference from 20 years ago! The day of the massively unhip editor is upon us) continues with Spidey caught in the middle of two ancient threats that are conspiring to take him and the city itself down.
Plus, Carlie trapped at the Police Station with someone after her blood!
32 PGS (each)/Rated A 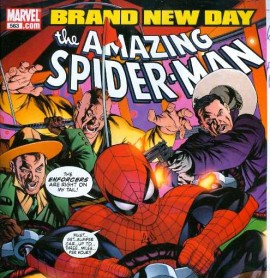 MARVEL COMICS
(W) Bob Gale (A/CA) Mike McKone
Written by “Burpy” BOB GALE
Pencil and Cover by “McLovin'” MIKE McKONE
Remember that joke that starts, “So Spider-Man walks into a bar, and…?” Well, when it’s the villain-filled Bar With No Name, it’s no joke – it’s a barroom brawl as only Mike McKone can draw it! And that’s only the beginning of one of the most maddening nights in Spidey’s life! Throw in The Enforcers, The Bookie, and a climax at Coney Island, and you’ve got a recipe for the nuttiest Spider-Man story this year. Gale didn’t tell us what he was drinking when he wrote it, but it must have been pretty good stuff!
32 PGS./Rated A
Add to Cart 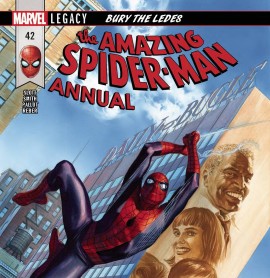 MARVEL COMICS
(W) Dan Slott, Hein, David (A) Cory Smith & Various (CA) Alex Ross
• Searching for answers about a mysterious voicemail from her late husband, Ned Leeds, Betty Brant finds herself in the midst of a mafia conspiracy that stretches back decades!
•  Convinced that Ned is alive and trying to help her solve the case, Betty enlists the help of the Amazing Spider-Man to get to the truth…
•  …and the ENFORCERS want a word with both of ’em!
•  Also includes a short Spidey story by Broadway playwright David Hein (Come From Away)!
Rated T
Add to Cart