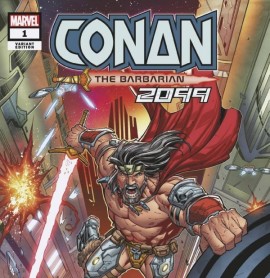 EONS FROM HOME, THE BARBARIAN BATTLES THE CIVILIZATION OF 2099!

In the far flung future of 2099, will barbarism finally triumph over an endangered civilization? When CONAN THE BARBARIAN entered the Marvel Universe with the SAVAGE AVENGERS, he stayed to conquer and claim his kingship in modern times. Now cursed by a mystic to live beyond his years, when Conan’s new kingdom is threatened, he swings his blade once more! But as the calamity in 2099 bears down on his secluded realm, will the future shock unseat the barbarian king? An unforgettable chapter unlike anything you’ve ever seen in the saga of Conan! 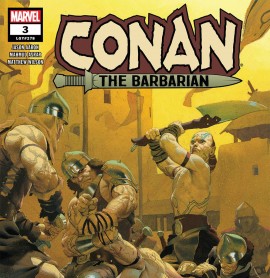 MARVEL COMICS
(W) Jason Aaron (A) Mahmud A. Asrar (CA) Esad Ribic
THE CRIMSON WITCH GETS CLOSER TO HER GOAL AS “THE LIFE AND DEATH OF CONAN” CONTINUES!
•  Hungry and desperate, CONAN’s experience in “civilization” takes a dark turn…
•  When Conan is caught thieving, he’ll discover the penalty is DEATH!
•  But how does this figure in to the CRIMSON WITCH’s plan?
Add to Cart 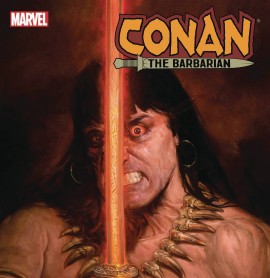 MARVEL COMICS
(W) Jim Zub (A) Robert Gill (CA) E.M Gist
“THE CURSE OF THE NIGHTSTAR” CLAIMS CONAN! CONAN has escaped the Great Crucible, but his “March to Khitai” has just begun!  Conan now possesses the TOOTH OF THE NIGHTSTAR, a mighty weapon liberated from the Uttara Kuru leadership.  But if he’s not careful, the sword will possess him!  A dark force is bound to the mystic blade, a spirit hungering for souls – including the Cimmerian’s!  And It. Must. Feed! 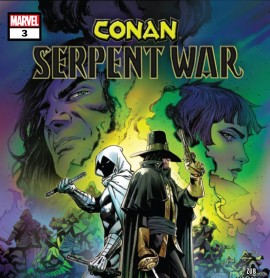 MARVEL COMICS
(W) Jim Zub (A) Luca Pizzari, Vanesa R. Del Rey (CA) Carlos Pacheco
THE LAST STAND OF  CONAN, DARK AGNES, SOLOMON KANE  & MOON KNIGHT!
•  CONAN and DARK AGNES face off against the servants of SET in STYGIA!
•  SOLOMON KANE and MOON KNIGHT encounter a bizarre relic – but will it aid their quest, or doom their compatriots?
•  And what deadly secret lurks in the mind of JAMES ALLISON?
Parental Advisory
Add to Cart 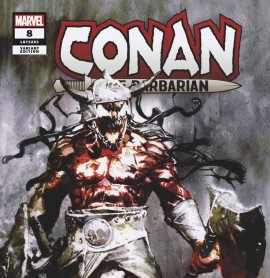 MARVEL COMICS
(W) Jason Aaron (A) Gerardo Zaffino (CA) Bill Sienkiewicz
THE TWISTED SPELL OF THE WIZARD THOTH-AMON! “The Life & Death of Conan” continues as CONAN returns home to Cimmeria! But things aren’t exactly as he remembers them… Is he that out of touch… or is he falling right into the trap of the wizard THOTH-AMON?! PLUS: The next chapter in the all-new novella “BLACK STARLIGHT”!
Parental Advisory
Add to Cart 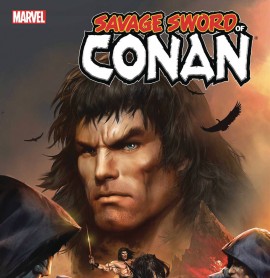 MARVEL COMICS
(W) Frank Tieri (A) Andrea Di Vito (CA) Dave Wilkins
A DEMON IN ARGOS!
•  After witnessing a heinous crime, CONAN hunts down a mysterious demonic sect.
•  But whatever his intentions, Conan may well doom the nation if he doesn’t solve the mystery in time!
•  An epic quest across the Kothian Hills and a surprise twist!
•  Plus: The concluding chapter of the all-new novella “THE SHADOW OF VENGEANCE”!
Parental Advisory
Add to Cart 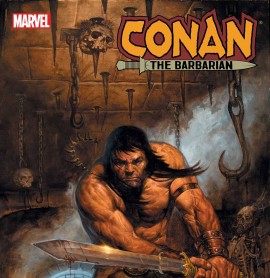 MARVEL COMICS
(W) Jim Zub (A) Roge Antonia (CA) E.M Gist
INTO THE CRUCIBLE AS THE MARCH TO KHITAI BEGINS!
Conan has faced many foes since leaving Cimmeria, but the greatest challenge lies ahead!  A perfect jumping-on point for new readers as Conan finds himself in a city in the mystical Uttara Kuru, further on the eastern border than the young barbarian has ever traveled.  And with the new city comes new dangers!  Unfamiliar with the language, Conan inadvertently agrees to be the latest entrant to the Great Crucible.  The people of the city support their foreign champion…but what deadly traps does the Crucible hold, and what will Conan sacrifice to overcome his ordeal?
Writer JIM ZUB (SAVAGE SWORD OF CONAN, AVENGERS: NO ROAD HOME) and artist ROGÊ ANTÔNIO (CONAN 2099, X-MEN RED) lead Conan on an all-new journey, as we begin a new era for CONAN THE BARBARIAN into undiscovered country!
Add to Cart 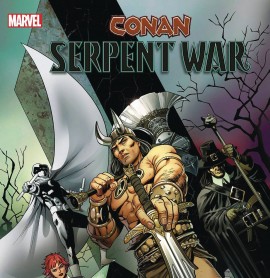 MARVEL COMICS
(W) Jim Zub (A) Scot Eaton (CA) Carlos Pacheco
THE WRATH OF THE SERPENT GOD!
WARRIORS ACROSS TIME DEFY THE ELDER GODS!
JAMES ALLISON will soon die. But it’s not his first death. He’s lived many lives, in many places – lives he can recall in vivid detail. But when an Elder God called the WYRM reaches across time to James, an ages-spanning quest begins! The serpent god SET plans to usher in an eternity of darkness, and only the chosen warriors across time and space have a hope of stopping him: CONAN THE BARBARIAN, SOLOMON KANE, DARK AGNES, and the man known as MOON KNIGHT!
In an unprecedented comics event, Robert E. Howard’s characters join forces along with Marvel’s Moon Knight, in an all-new saga built on REH and Marvel lore from across the ages!
PARENTAL ADVISORY
Add to Cart