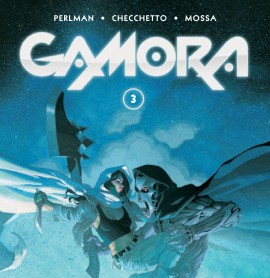 MARVEL COMICS
(W) Nicole Perlman (A) Marco Checchetto (CA) Esad Ribic
ON THE DOOMED PLANET UBLIEX, ESCAPE IS IMPOSSIBLE!
•  While the planet literally breaks apart around her, GAMORA searches for her prey, determined to get her revenge against the BADOON – even if it’s the last thing she does!
•  But on Ubliex, where adventure and criminals wait around every corner, Gamora might find more than she ever imagined…
•  …a truth so astounding that it will rock Gamora to her very core.
Rated T+
Add to Cart 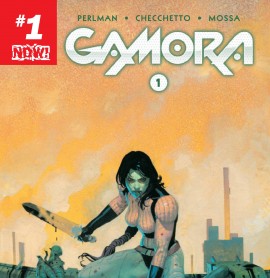 MARVEL COMICS
(W) Nicole Perlman (A) Marco Checchetto (CA) Esad Ribic
Before the Guardians…there was Gamora!
From screenwriter Nicole Perlman-co-writer of the Guardians of the Galaxy screenplay-and Marvel superstar artist Marco Checchetto comes a killer new ongoing series! Once upon a time she was Thanos’ heartless pet assassin and favorite daughter. Today, she is the backbone of the Guardians of the Galaxy, putting her life on the line to defend the innocent. What was it that transformed her from being used as a tool of her oppressor, to a champion of the powerless? Embark on a journey of revenge and redemption, and witness how Gamora earned her reputation as the Deadliest Woman in the Galaxy.
Rated T
Add to Cart