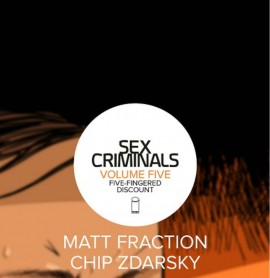 IMAGE COMICS
(W) Matt Fraction (A/CA) Chip Zdarsky
Suzie and Jon have that special something-when they have sex, they freeze time and do crimes. Well-they HAD that special something. In the aftermath of what would appear to be a breakup, where do our two love-crazy time-freezing sex-having bank robbers go? REBOUND AHOY! Also everything gets more dangerous and complicated? But it’s okay. Collects SEX CRIMINALS #21-25. 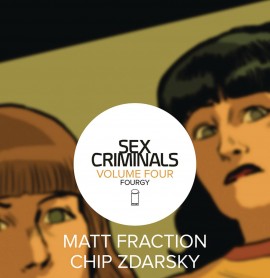 IMAGE COMICS
(W) Matt Fraction (A/CA) Chip Zdarsky
Everybody’s favorite sex-having, time-freezing, bank-robbing crew of lovable lovemisfits come together and ask themselves the big question: are we still into this? THE ANSWER MIGHT SURPRISE YOU (if you think the answer is no). “Part romance, part sex comedy, and part heist drama, [SEX CRIMINALS] manages to turn a story about two lovers who rob banks with orgasms into the most emotionally realistic and relatable sex comic ever made.”-Wired Magazine
Collects SEX CRIMINALS #16-20. 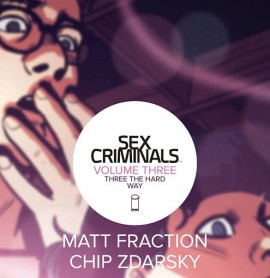 IMAGE COMICS
(W) Matt Fraction (A/CA) Chip Zdarsky
As seen on LATE NIGHT WITH SETH MEYERS! The Eisner- and Harvey-award winning raucous sex comedy that Time magazine called the Comic of the Year and Apple called “inappropriate for sale on iOS devices” returns in SEX CRIMINALS V3: THREE THE HARD WAY. So it turns out Jon and Suzie aren’t alone ? other people around the world, like them, freeze time when they climax. A self-appointed group wants to regulate and control them through fear and intimidation. Jon and Suzie are falling in love and want their freak flags to fly, but if they’re going to fight back they can’t do it alone. And really, isn’t that a metaphor for the whole series? That we might all be alone but we’re all alone together? I think so. If you read only one comic with a semen-demon in it this year, please make it SEX CRIMINALS V3: THREE THE HARD WAY. Collects SEX CRIMINALS #11-15 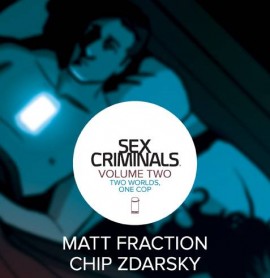 IMAGE COMICS
(W) Matt Fraction (A/CA) Chip Zdarsky
The second storyline from the Eisner-award winning SEX CRIMINALS finds the honeymoon to be over for Jon and Suzie. Once the thrill of new lust fades, where do you go? Come along and laff and love with Matt and Chip as they brimp back ceaselessly against the past. 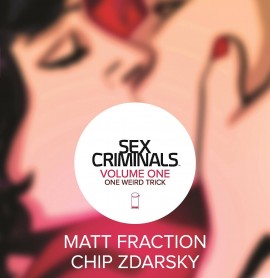 Suzie’s just a regular gal with an irregular gift: when she has sex, she stops time. One day she meets Jon and it turns out he has the same ability. And sooner or later they get around to using their gifts to do what we’d ALL do: rob a couple banks. A bawdy and brazen sex comedy for comics begins here, by MATT FRACTION (SATELLITE SAM, Hawkeye) and CHIP ZDARSKY (Prison Funnies, Monster Cops). Collects SEX CRIMINALS #1-5.