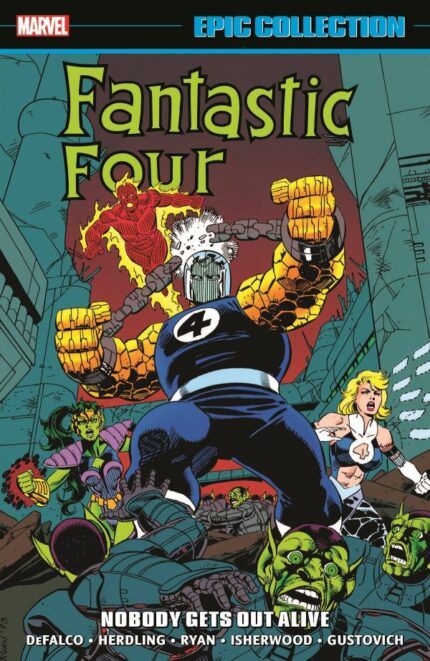 Fantastic Four Epic Collection: Nobody Gets Out Alive GN TP

Graphic Novels, Launch, Marvel, Marvel Comics, Marvel Launch
R899.00
Four no more! One member of the FF is about to die — but will it be at the hands of Paibok the Power Skrull, Devos the Devastator or Doctor Doom?! The remaining “Fantastic Three” don’t have long to grieve before they’re whisked away to the Skrull Throneworld! If they can fight their way free, the trio may become a quartet again — with potential members including Lyja the Lazerfist, the teenage Franklin Richards and Ant-Man! As Malice strikes, the FF must aid Namor in a bizarre battle against alien foes. Then, the Watcher banishes the team to an alternate world where they relive their initial encounter with Galactus! What is the Watcher’s endgame? Who is the mysterious Dark Raider? And is this the end of the FF?!
Add to wishlist
Add to basket
Quick view
New 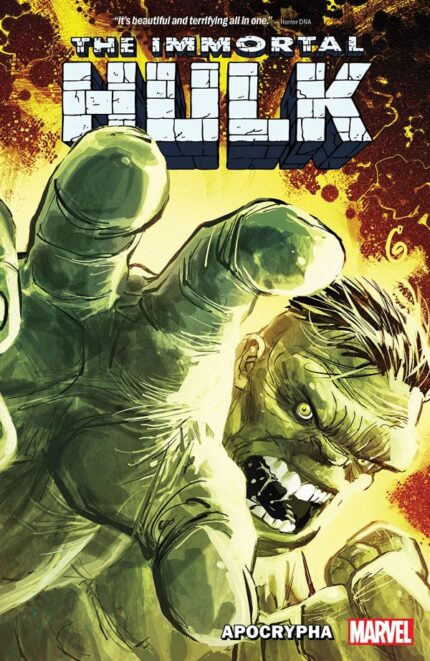 Graphic Novels, Launch, Marvel, Comic Books, Marvel Comics, Marvel Launch
R299.00
Stephen Strange is dead. All that is left is a charred skeleton. Bruce Banner wants to know why, and he won’t stop until he knows the truth. The road to answers will lead to the return of the Defenders! Then, the symbiotic nightmares of ABSOLUTE CARNAGE and KING IN BLACK engulf two very different Hulks! And when Jennifer Walters falls in battle during EMPYRE, she steps through the Green Door…and learns the full horror of being an Immortal She-Hulk. PLUS: Revisit the tortured relationship between Bruce and his father that inspired IMMORTAL HULK!
Add to wishlist
Add to basket
Quick view
New 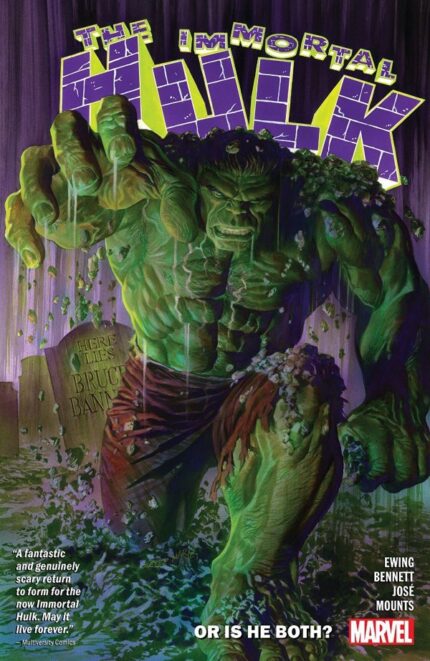 Graphic Novels, Launch, Marvel, Comic Books, Marvel Comics, Marvel Launch
R299.00
Horror has a name. You'd never notice the man. He doesn't like to be noticed. He's quiet. Calm. If someone were to shoot him in the head...all he'd do is die. Until night falls—and someone else gets up again. The man's name is Banner. The horror is the Immortal Hulk! And trouble has a way of following them both. As reporter Jackie McGee tries to put together the pieces, Banner treads a lonely path from town to town, finding murder, mystery and tragedy as he goes. And what Banner finds, the Hulk smashes! Elsewhere, the hero called Sasquatch can't help but feel involved. In many ways, he's Banner's equal—and his opposite. Sasquatch is about to risk his life by looking for the man—and finding the monster!
Add to wishlist
Add to basket
Quick view
New 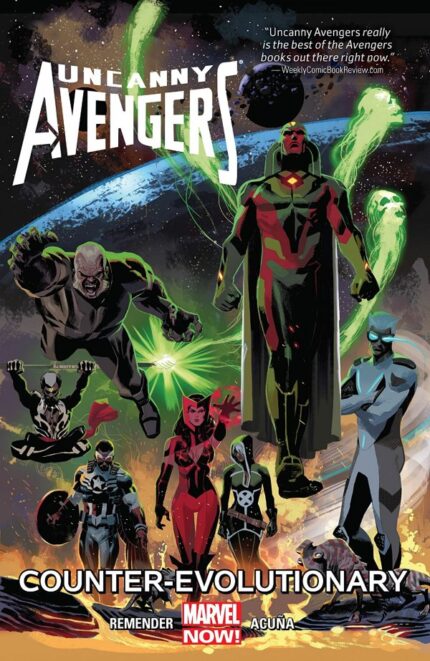 Launch, Marvel Launch
R370.00
From the ashes of AXIS an all-new, all-different Avengers team assembles! The tragedy at the end of AXIS has left the Uncanny Avengers vulnerable, and someone is taking advantage of it. One of the Avengers oldest foes returns with a terrible secret that will, all hyperbole aside, shatter the lives of two members of the squad. What is Counter-Earth? What terrible secrets does it house? Collecting UNCANNY AVENGERS #1-5.
Add to wishlist
Add to basket
Quick view
New 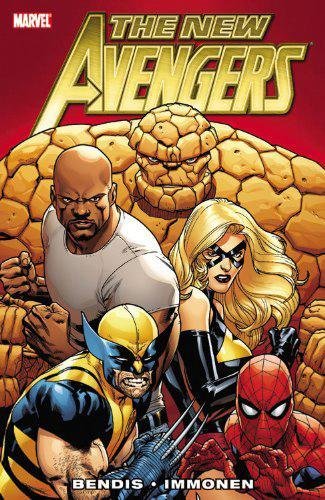 Launch, Marvel, Marvel Launch
R399.00
Collects New Avengers #1-6. Find out who the New Avengers are, where they call home (gotta see it to believe it!), which Dark Avenger has joined their ranks, and just who the interdimensional demonic threat to our existence is! These heroes have gathered to take on the threats too dark, too dangerous, and too bizarre for any other team of heroes.
Add to wishlist
Add to basket
Quick view
New 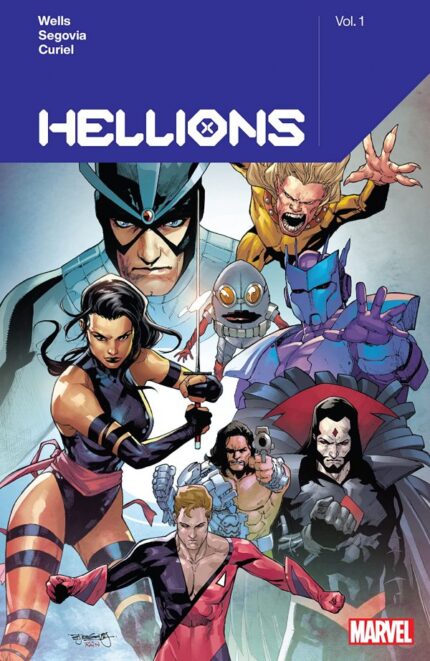 Bad is the new good!

When the new nation of Krakoa opened its doors to all mutants and forgave all past crimes, its leaders knew they’d have to accept some of their worst foes into the fold—but they didn’t plan for what to do with them. Not to worry—Mister Sinister has his own ideas for the troublemakers. Meet his new Hellions: Scalphunter, Wild Child, Empath, Nanny, Orphan-Maker, Psylocke…and Havok?! They’re the new mutant team you’re going to hate to love! Though right now the Hellions can barely keep from killing one another. Of course, that might be just what Mister Sinister is counting on when he sends them to clean up his messes! But can this dysfunctional new squad handle the return of the grand dame of the damned: the Goblin Queen, Madelyne Pryor?!
Add to wishlist
Add to basket
Quick view
New 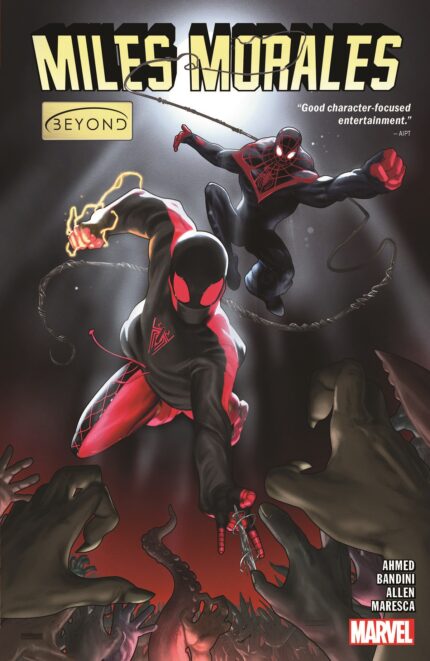 Graphic Novels, Launch, Marvel, Marvel Launch, Miles Morales: Spiderman, Miles Morales
R299.00
What lies Beyond for Miles Morales? Momentous events in the world of Peter Parker are about to have dire repercussions for both Miles and his metamorphic clone, Shift! But what does this domino effect of events mean for Ben Reilly, the new corporate-sponsored Spider-Man? Miles and Shift must descend into the darkness of the Assessor's HQ for answers - and when Space Stone-host Quantum enters the fray, the heroes' only hope might just be the Beyond Corporation! Plus: As Miles investigates a series of monster attacks in Brooklyn, he runs into Ms. Marvel's friend and ally, Amulet! Working together, can they get to the bottom of this mystery before the monsters take them down too?
Add to wishlist
Add to basket
Quick view
New 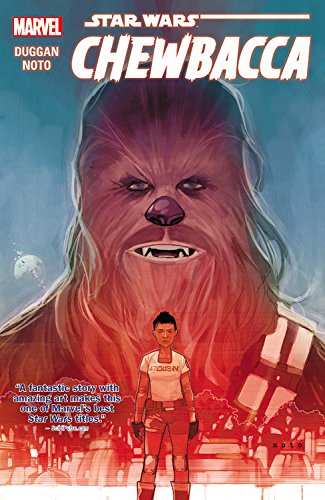 Launch, Marvel, Marvel Launch
R299.00
Known as the skilled co-pilot of the infamous Millennium Falcon, the legendary Wookiee warrior CHEWBACCA will star in his very own adventure! After the battle of Yavin, Chewbacca is on his own when he crash lands his ship on an Imperial occupied planet. Now stranded, Chewie finds himself caught in the middle of trying to return to the rebellion and helping a young and feisty girl in need. Writer Gerry Duggan (DEADPOOL, 1872, HULK) and artist Phil Noto (BLACK WIDOW, X-23, UNCANNY X-FORCE) bring us a never-before-seen tale of the heroic Wookiee we all know and love. Rated T
Add to wishlist
Add to basket
Quick view
New 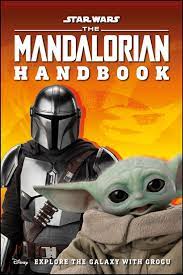 Star Wars The Mandalorian Handbook: Explore the Galaxy with Grogu

Packed with facts from the TV series Star Wars: The Mandalorian, this book is aimed at young kids who want to join Mando, Grogu, Boba Fett, and Ahsoka Tano on their thrilling adventures.

They’ll meet strange aliens and droids, learn about new planets and frightening monsters, and read about the evil villains who will stop at nothing to complete their missions. Hop aboard the Razor Crest and get exploring with Star Wars: The Mandalorian Handbook!
Add to wishlist
Add to basket
Quick view
New 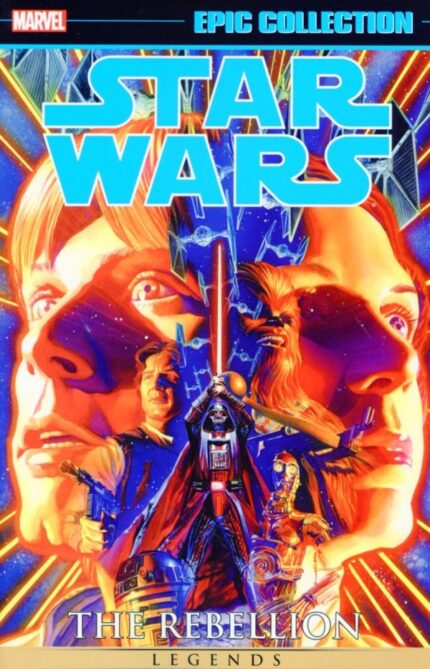 Launch, Marvel, Marvel Launch
R950.00
When the Death Star falls, what will happen next for the galaxy? Find out in this collection of tales set in the immediate aftermath of Star Wars: Episode IV A New Hope! Stinging from defeat, Darth Vader is consumed with tracking down the Force-strong young pilot who destroyed his battle station. What would it mean for the Empire if Vader and the evil Emperor Palpatine discover Luke Skywalker's identity? With the Rebellion emboldened, Princess Leia leads a stealth squadron, Han Solo and Chewbacca face off against the bounty hunter Boba Fett, and Luke and Wedge Antilles infiltrate an Imperial Destroyer. Witness the continuing adventures of everyone's favorite Star Wars heroes and villains! Collecting STAR WARS: EMPIRE #7, #14 and #16-18; STAR WARS: VADER'S QUEST #1-4; and STAR WARS (2013) #1-12. Rated T
Add to wishlist
Add to basket
Quick view
New 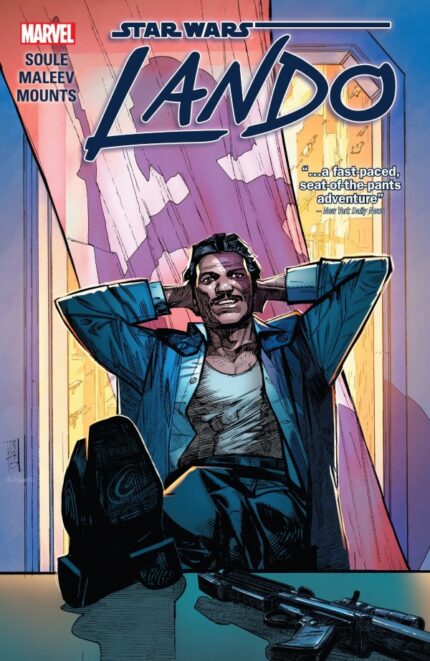 Launch, Marvel, Marvel Launch
R299.00
MARVEL COMICS
(W) Rodney Barnes (A) Paolo Villanelli (CA) William Forbes
Straight from the frames of the highly anticipated film Solo: A Star Wars Story swaggers a younger - and somehow even cockier - Lando Calrissian! Before his days in the Rebellion, before he ran Cloud City, even before he lost the Millennium Falcon, comes this tale of Lando's adventures and misadventures in search of love and money - leading right up to his appearance in Solo! Lando isn't one to stick his neck out...unless there are credits to be had. So when oppressed workers in a droid junkyard need his help, they'd better hope their freedom is worth something to him. But one of their number is out to turn Lando over to his enemies - and there are plenty of those. Will a galaxy of bad guys finally get their due against the ultimate thorn in their side? Collecting STAR WARS: LANDO - DOUBLE OR NOTHING #1-5.
This will be available to collect or ship in 4-5 weeks
Add to wishlist
Add to basket
Quick view
Load more products
Loading...
Shopping cart
close